Seminar on the Perception and Rhetoric in “Frontline States”: An early assessment of the consequences of Russia’s war in Ukraine

The Russian Federation’s full-scale invasion of Ukraine on 24 February 2022 and the subsequent war have already had a dramatic effect on multiple fields, from international order, through regional economy, to individual lives. The aggression is being widely analyzed by politicians, journalists, academics, and citizens around the world, yet it gains particular importance in NATO’s “frontline states”, including Poland, Romania, and the Baltic states. These countries share a complicated historical relationship with Russia and a particular geopolitical position on the Eastern flank of NATO and the EU. Hence, the perceptions and rhetoric surrounding the conflict and its consequences visible in these frontline states have become significant in shaping international and national policies and security. While the Russian war against Ukraine is still ongoing, it is vital to identify, assess and discuss the main strands and tropes of the political and security discourse surrounding the war and its consequences.

The overall aim of this project is to bring together Polish and international academic and think-tank community to share their early assessment of the consequences of Russia’s war in Ukraine with the public and prepare the initial pillars for a more substantial cooperation between scholars from FIPS (Faculty of International and Political Studies at JU) and the external environment of the university based on the FIPS’ expert platform of LSE IDEAS CSEEP at the Jagiellonian University. By inviting scholars and practitioners to participate in a joint expert seminar, this project attempts to popularize the interdisciplinary effects of research that are key to understanding a complex security situation in the region of Central and Eastern Europe (CEE).

A one-day meeting will present the research results to the public and engage the audience in the discussion. Its aim is to get wide outreach both in Krakow, Poland and internationally. 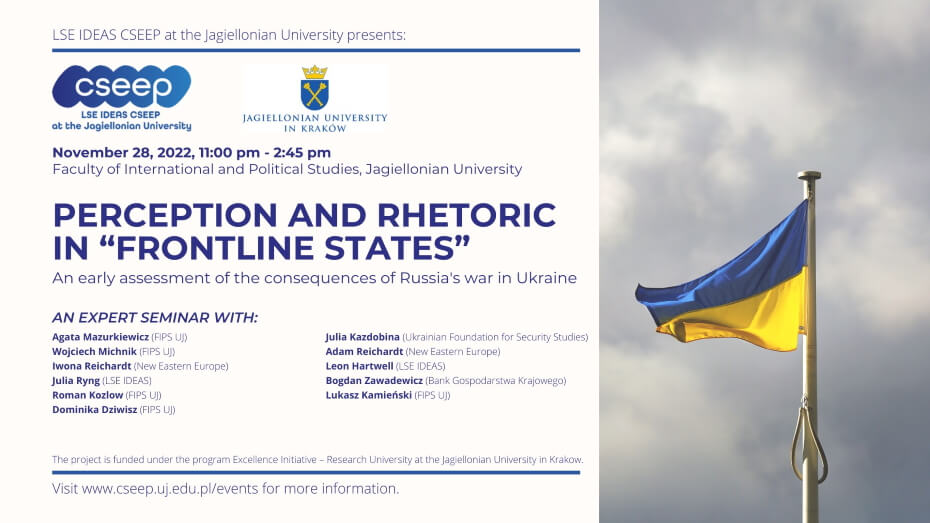